30 Mar 2018
Winter Night on Hardangervidda - From Oslo to Bergen by Train
I took the afternoon train from Oslo to Bergen, well aware that the last part of the journey would take place in darkness. But as it turned out, there was sleat later changing into rain once we passed the Hardangervidda, so I didn't miss much since the scenery would have been veiled by rain and fog anway.

The first part of the ride offered a mostly overcast sky and the long period of twilight typical for late March in the north. I managed to get some photos out of the moving train - a journey into winter indeed. Snow was piling up high on the Hardanger Plateau. 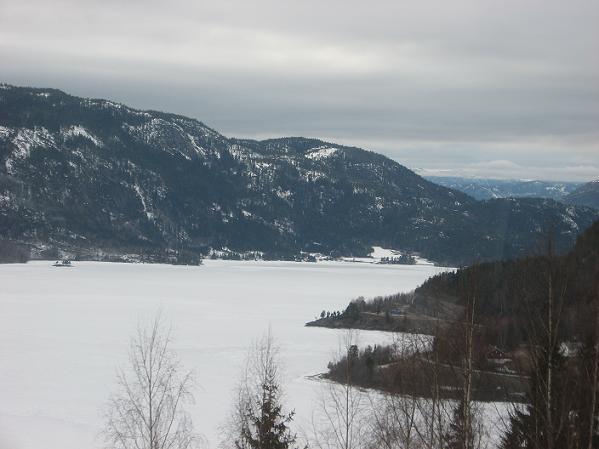 Like the Dovre Railway, the Bergenbanan (Bergen Railway) was built in bits and pieces. The part from Bergen to Voss dates to 1883. There also was a railway from Oslo to Drammen since 1866. The whole single track line connecting those parts was finished in 1909. It covers a distance of almost 500 kilometes (310 miles), with some 180 tunnels and 300 bridges; the ride takes about seven hours. 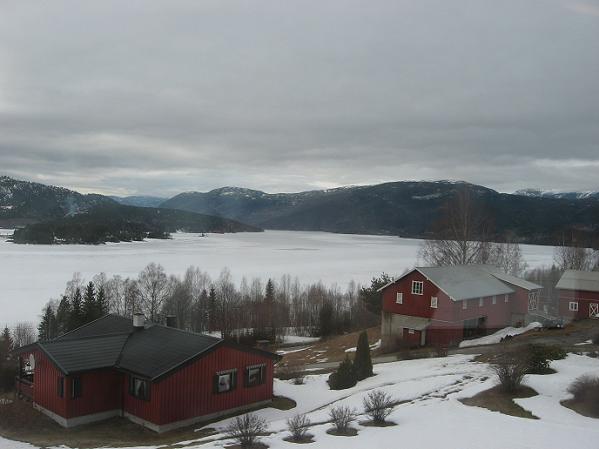 Village at the Drammensfjord
The Drammenfjord is a firth of 30 kilometres length which confluences into the outer Oslofjord. It's main estuary is the Drammenselva (Drammen river). Until 2005, a double bridge of 340 respective 450 metres length crossed the river via an island at the town Drammen, but now a modern bridge of 1890 metres spans the entire river.

Shortly after passing the town, the sun decided to have a little peek out of the clouds and made for some lovely mix of water, snow and reflections. 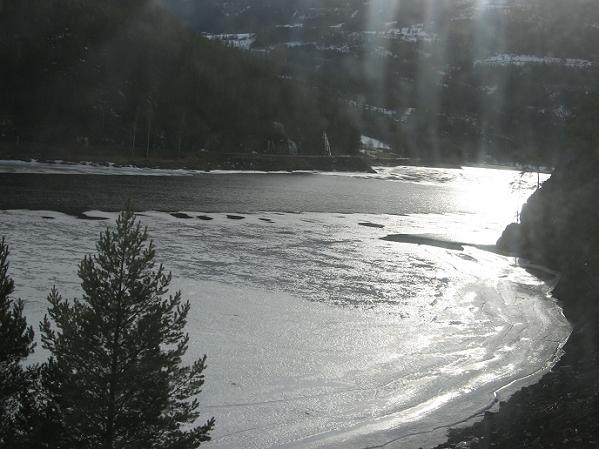 Evening sun sparkling on the Drammenselva
Along Lake Krøderen, the Drammen river (about 50 kilomtres from Oslo) and on to Gol (200 km from Oslo) the rise is not significant, but past Gol the train climbs up to the Hardangervidda. At Geilo (250 km from Oslo) it already reaches 794 metres, and winter was truly setting in. Geilo is one of Norway's most popular skiing regions - no wonder when you look at that. 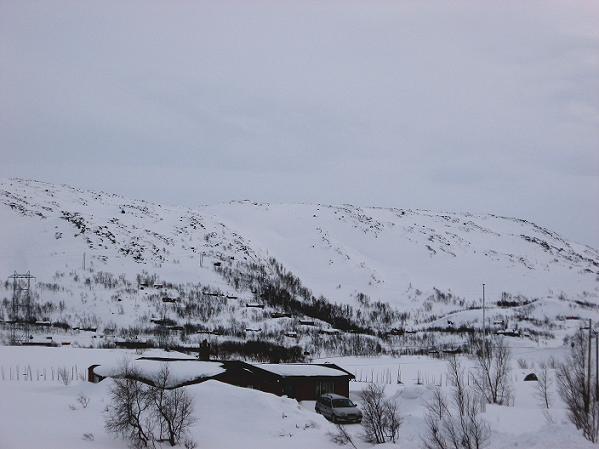 Holiday huts near Geilo
A few miles later the Hardangervidda begins and takes us up to 1,237 metres (4,050 ft.) above sea level near Finse. The original track led up to 1,300 metres, until the Finse tunnel was built in 1993, cutting through one of the worst part of the vidda. The railway moves above the treeline for about hundred kilometres, and there is a lot of snow. Really a lot - five to eight metres of the white fluff is considered normal, as are storms and snow drifts.

Part of the landscape here is actually a lake; the huts are situated at its shore. Those huts mostly have electricity and other amenities so they can be used in winter. 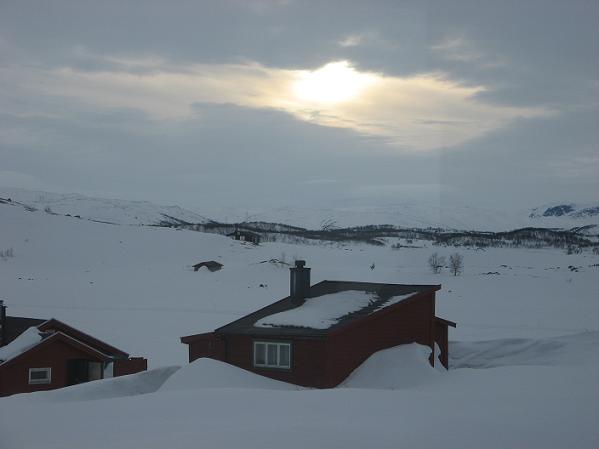 Holiday houses on the Hardangervidda
The Hardangervidda is the largest high plateau in Europe with an expanse of about 8,000 square kilometres, and a height between 1,200 to 1,400 metres above sea level (the mountain range Sandfloegga rises to 1,721 metres). One can imagine how difficult it proved to build a railway across the plateau, and how difficult it continues to be to keep the track clear of snow. Parts are covered by avalanche protections or run underground, but it still takes special rotating snow blasters running along the tracks from either Geilo or Myrdal to keep the traffic going. Back in the early 19th century, those were steam powered; today diesel is used. 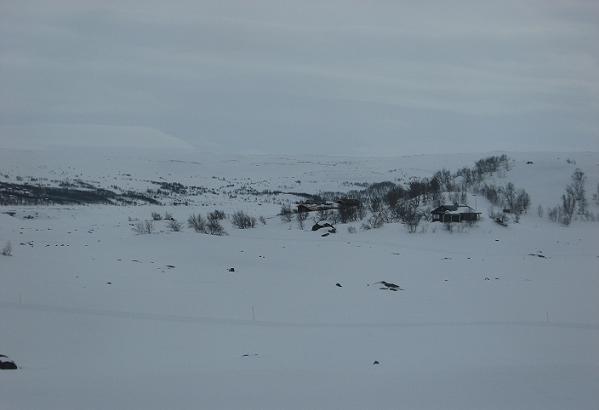 Hardangervidda
A winter journey can be lovely, but I would like to take the tour in summer as well when one can admire the lakes and the Hardangerjøkulen (Hardanger Glacier), and the sparse, sub-arctic vegetation. There is a famous cycling and hiking way across the vidda, the Rallarvägen from Haugastøl to Flåm. 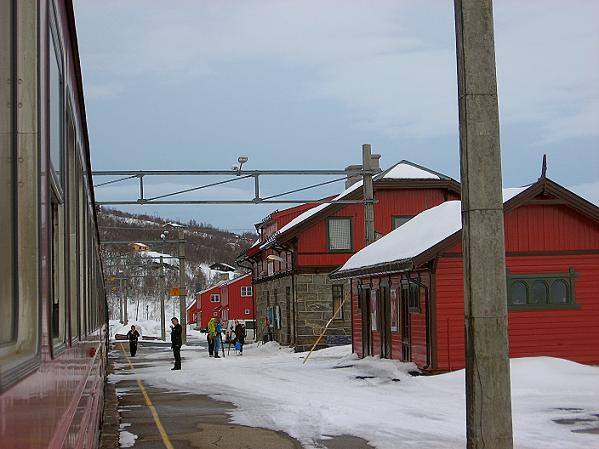 Haugastøl station
The railway station at Haugastøl (275 km from Oslo, 988 metres above sea level) is a fine example of station buildings with a stone walled first floor and a second half-storey made of timber - the only one along the railway that survives unaltered since 1908.

Below is the station and hotel of Finse with snow up to the second floor. That may be normal for my readers from some parts of the US, but I have never before seen that much snow in one place. 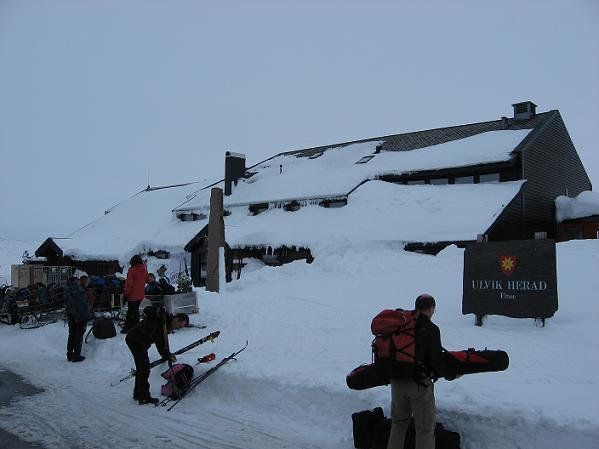 Finse station and hotel
After Finse, it was getting too dark to take decent photos, and the lights in the train were switched on. I decided to get me a prawn and egg sandwich from the bistro waggon and have a bit of dinner. 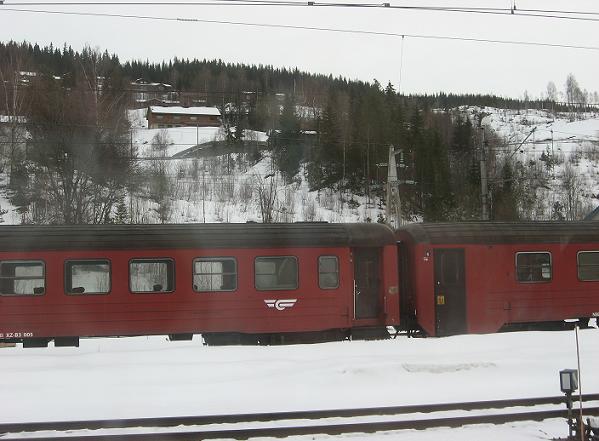 The train
The information in this article comes from a little guidebook the NSB Customer Service offered the guests of the railway: Oslo - Bergen. Die Bergenbahn.