19 Aug 2009
A Summer Afternoon in Germany
The weather is fine these days albeit a bit on the hot side (at least for me who thinks anything above 25°C is what hell must be like). So my father and I decided to take a little tour down to the Weser, one of our favourite areas. We found a few things on the way.

-- A pink palace for Alianore: 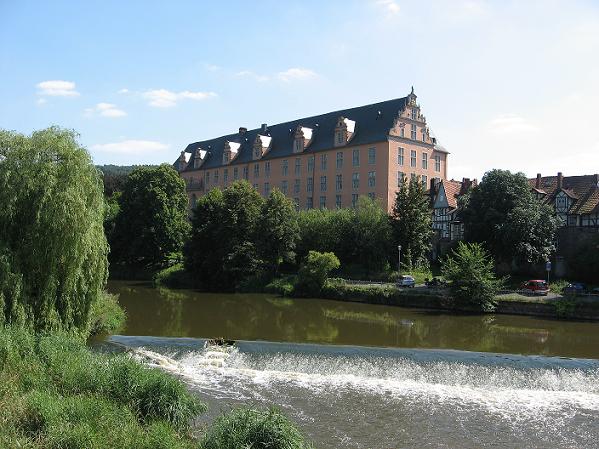 This pretty building is the Welfenschloss in Hannoversch-Münden, built by Duke Erich II of Calenberg-Göttingen in 1560 in the style of the so called Weser Renaissance. It was a residental palace used for living, but also provided rooms for the administration of the area. In later generations its importance as ducal seat decreased, and in 1849 the south wing burned down. Today it houses the town library, a museum, and the tax office. 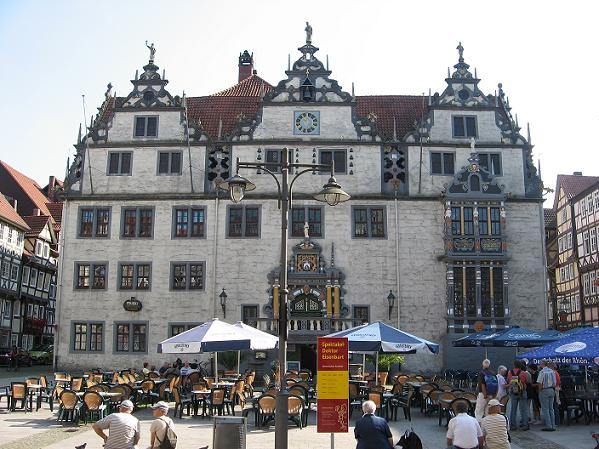 Town Hall, Hann.-Münden
The town hall itself dates back to the Gothic style, but in 1618 a Renaissance facade had been added with a number of decorative elements, among them as set of chimes that show figures from the life of the (in)famous Doctor Eisenbarth. 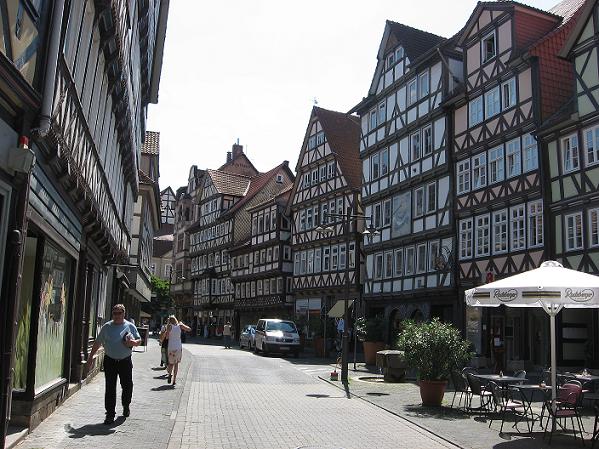 Half timbered houses in Hann.-Münden
Hannoversch-Münden has about 700 of them and all in a fine condition. The town with the odd name it got to distinguish Münden from Minden (which is not far away) lies at the confluence of Werra and Fulda, and because of this favourable situation was an important trade centre in the Middle Ages. Remains of the Medieaval fortifications and the old harbour, the Schlagd, can still be seen.

-- Three Rivers in one pic: 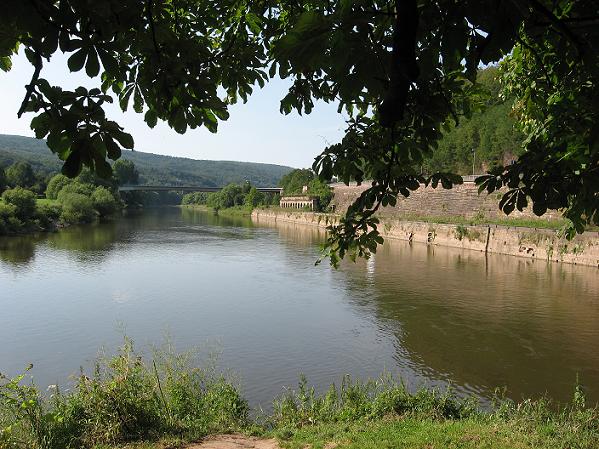 Confluence of Fulda (left) and Werra (right), forming the Weser (ahead)
Not an unknown village from Wheel of Times, but the result of a name change. Linguistically, Werra and Weser are the same name that just changed with the dialects spoken at its shores. Since the Fulda which confluences into the Werra/Weser is a river of equal size, this point officially marks the name change from Werra to Weser for several centuries now, and it's the reason Hann.-Münden calls itself the 'town of the three rivers': 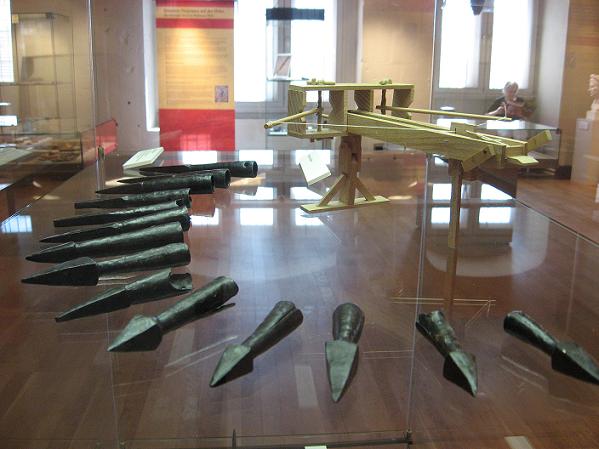 Roman catapult bolts
There is an exhibition of the Hedemünden finds in the Welfenschloss. I had seen some of them a few years ago, but this exhibition has added the new finds and a model of the supply fort and the marching camp at Hedemünden. A well made display, though the glass makes it a bit difficult to get good shots due to all those reflections. 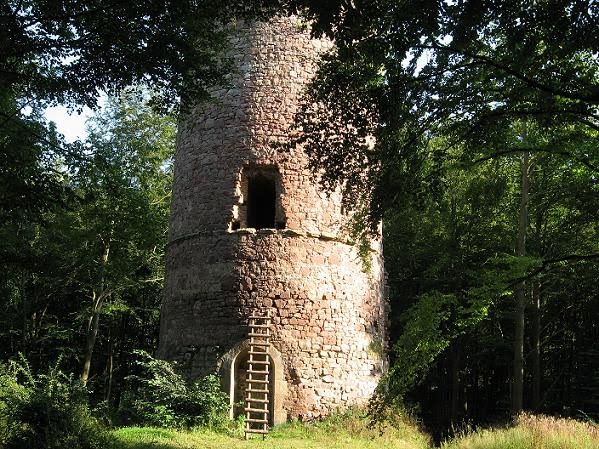 Bramburg, the keep
The remains of the Bramburg are hidden in a beech wood on a promontory above the Weser. It was first mentionend 1093 but must have been older. Heinrich the Fat, the founder of Bursfelde Abbey, had the castle fortified in order to protect the nearby abbey. Later it came as fief to a family von Stockhausen that proved prone to highway and high river robbery. Thus the Bramburg was besieged by Landgrave Wilhelm of Thuringia and partly destroyed. Today only the keep remains, and it's really well hidden in all that lush green. 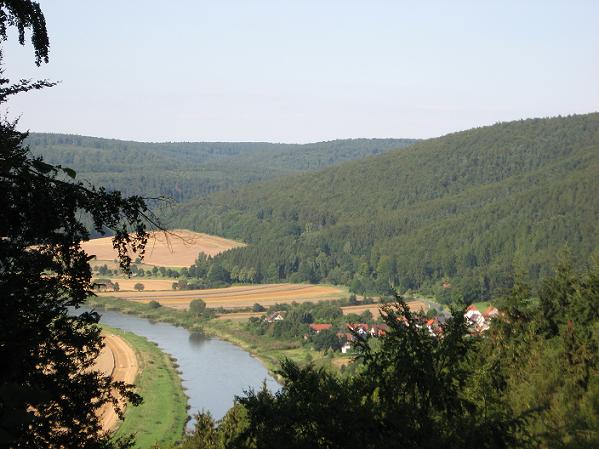 View from the Bramburg down to the Weser river
I think you'l understand why we love the Weser surroundings so much.

On the way back we had dinner at one of our favourite restaurants, the one in Bursfelde. It has a terrace facing the Weser; the most beautiful place so sit on a peaceful summer evening.   ¶ August 19, 2009

Comments:
Gorgeous pictures! The castle looks like a sort of lost city in the midst of the forest.

Thank you, Carla. Yes, that old castle really belongs into a fairy tale. There is a legend that it has been built by the daughter of a king of the Giants - many of the German castles have foundation myths like that.

You have some gorgeous buildings over there - so much history compared to us. I really liked the half-timbered buildings. Beautiful.

Ooooh, thank you for my lovely pink palace! :-)

It's incredibly hot here today - 35 degrees and humid. I think my brain has turned to mush.

Another pink palace??? How many do you have over there lol!

And that tower at Bramburg - I don't think that ladder in the picture is of much use - any aspiring Romeo would only get half way up lol!

And yes, it has been too hot for me here too, especially as I have been moving furniture about and putting up flatpack desks (actually, only one - it just felt like more!)

Shelley, that's why I love living here. I would miss the history in places like the US or even NZ.

Alianore, it's a nice one, isn't it? I immediately thought of your post when I saw it (I had seen it before but didn't remember it was pink).

Lady D, I have no idea what the latter is doing there. You can't go inside the tower, it's too dangerous. But in former times the entrances was the upper door, the ground level one got added later. That part of the tower had been used as dungeon in the Middle Ages.

Lovely pics, as usual, Gabriele. If I ever come to Germany again I must look at your part.

I would fight Alianore for the pink palace if only there were not so much gardening and housework:-)

Okay, not THIS year....year after next.

The search for a nice restaurant is worth the trip.

And no fighting about the pink palace. If there's such a request for them I should hunt down another one. :)

Stag,
Germany is definitely worth a visit.

This is August and usually pushing 30 is a cool day, this morning it wasn't quite 20 when I woke up and it has barely made it to 25.

I loved the photo of the Bramburg Keep and the view of the river valley from it. It would fit perfectly in my current WIP.

Thank you, Barbara. And feel free to use the images. What is your novel about?